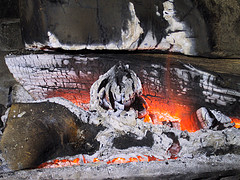 As an adventurous little girl, I remember rummaging through my Grandmother’s large clay pots in the kitchen storeroom. After harvest, the store room would be filled with sacks of maize, millet, dried cassava, ground nuts and heavy clay pots brimming with beans covered in a smoky grey powder… wood ash. We could carry those beans with us back to Zambia after spending the long summer holiday in my Grandmother’s village in Malawi. It was my mother who later told me that wood ash stops weevils from eating through the beans.  Weevils are tiny nasty buggers (beetles) that are a common pest and cause significant damage to harvested grains. The female beetles lay eggs insides grains, nuts and seeds (like beans) and the larvae eat the inside and bore out of the seeds.  Or if you have not carefully sealed the packet of cake flour, you will find some very unwelcome guests when you trying to bake that chocolate cake!

In the village, ash was abundant as all our meals were cooked outside on a wood fire. Wood ash also had other purposes- every morning we would take the ash from last night’s fire and pour it down the pit latrine to kill the smell of ……(you know what I mean)  Ash can also be used as a soil additive for fruit trees, vegetables like tomatoes, and vines.  It can also be used to repel insects, slugs and snails on a vegetable patch or fruit trees as it dehydrates them. And apparently a paste of wood ash and water can remove stains in furniture.

Lye, almost forgotten in this modern age, is a product of wood ash mixed with water– potassium hydroxide. It is still of importance now a days as it can be used to make  homemade soap, biodiesel, and oven cleaner.

The exact mechanism by which the wood ash repels weevils is unclear – one study in Nigeria suggests that wood ash dehydrates the seeds and makes them less prone to infestation– what ever the cause, wood ash made sure that we could enjoy Grandma’s beans until the next harvest.  It is cheap, effective and environmentally friendly!

7 thoughts on “Grandma found a lot of uses for wood ash!”