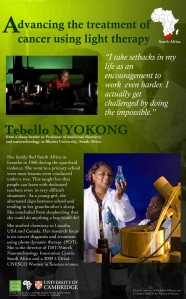 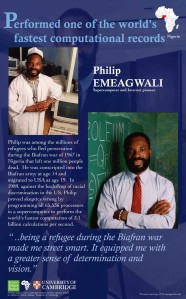 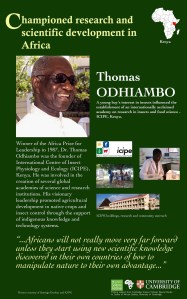 A scientist from Mali has shown mathematically that practice makes perfect, even in science! He is one of the eminent scientists and African Science Heroes that  I am profiling – Prof. Diola Bagayoko. He is a distinguished Professor of Physics at Southern University Baton Rouge, USA and founder of the Timbuktu Academy. In a conversation I had with him recently he described one of his greatest achievements – The Power Law of Human Performance or of Practice (PLP) which states that the time (T) it takes an individual to perform a given, simple task decreases as the number of times (N) the individual practices the task increases. This law applies to the performance of athletic, creative and intellectual tasks. He has written that “the shorter the time T to perform the task, completely and correctly, the higher the level of proficiency is” so… to become more proficient, you should practice more. The figure below graphically shows this model. Prof. Bagayoko says “that genius is mostly the result of sustained, competitive practice (efforts)” and that the same way adequate practice is needed for Olympic training is the same in the making of scientists and therefore the law of human performance provides the scientific basis for high expectations for all students and is a fail-safe strategy for promoting the academic excellence of all students regardless of race, sex, or economic background. This law is ingrained in the teaching philosophy of Timbuktu Academy , USA – an institution he set up in 1990 that runs recruitment, holistic mentoring, and research participation programs for middle school to graduate school students. The Academy is extremely successful with a significant number of students in high school attaining high scores, proceeding to college to study physics, chemistry or engineering and some even going up to graduate level training. He has won several awards including in 2002, the much coveted US Presidential Award for Excellence in Science, Mathematics, and Engineering Mentoring.  He has developed several principles that have propelled Timbuktu Academy to success  including the ten commandments of systemic mentoring which to name a few include financial support, communication skill enhancement, tutoring, development of computer skills and guidance whilst the problem solving paradigm  includes knowledge, skill, resource, strategy-experience, and behavior . I was very encouraged to hear that  “Anyone can be made into an intellectual giant, (a genius)!” .

I don’t look at television the same way any more. My eyes have become more critical, more keen, thinking of the sequences, the composition, the cuts, the camera angles, the narrative, captivating openings and strong endings. These are the long term effects of a two week intensive course in documentary film making.  I was living, breathing, consuming, and dreaming documentaries as result of the Doclab course that I took at the Documentary Film Makers Group from the 7th to 21st December. Intense falls very short of describing this course, it gave me a renewed respect for film makers especially those who self shoot. Documentary film making requires a unique combination of skills, planning, and most importantly talent that I can phantom will take me years to cultivate!

We worked with industry standard cameras – Sony Z1 and edited with the top of range final cut pro. Our tutors were experts in the field. Rosa Rogers – directing tutor and Anton Califono – editing tutor. We directed, shoot, conceptualized, storyboarded, edited, researched, recced, sought permissions, releases and agreements  to each produce a 3 minute film. At the end of the two weeks there was a real sense of friendship amongst the six participants. We each had the opportunity to direct one film and be the camera person on another.  In search of African pioneers, is the product braving the cold streets of London, feigning off frost bite, circumventing  pesky market inspectors, and hatching up last minute plans when one crucial filming location was inconveniently closed for business. These skills will go a long way in making what I hope will be a good film on African science heroes.  In search of African Pioneers is a prelude , the final full length  film African science heroes will feature interviews with leading African scientists, the Malawian public, African aspiring scientists in tertiary education in the UK, Malawian school kids and their teachers. So world, Africa and science engagement watch out cause here comes Muza, the filmmaker!